How much is the bulk density of hydrating (blended) cement paste?

In the last post, I explained the clear definition of different densities. Among these densities, bulk density and apparent density are the two most important values when performing mercury intrusion porosity (MIP) experiment.

Since samples that undergo MIP are usually irregular, the bulk volume is not possible to measure without being immersed in liquid. By the help of MIP, the bulk volume can be measured, thus the bulk density can be calculated simply dividing the mass by bulk volume.

At the end of MIP, the intruded volume of mercury at corresponding pressure is recorded, which means the pore volume is known. As soon as the bulk volume and pore volume are known, the solid volume including closed fine pores is also known. Then the porosity and apparent density are easily calculated.

The density of cement particles is commonly referred as 3.1 g/cm^3, and that of slag and limestone are 2.6 and 2.7 g/cm^3, respectively. You may be curious to know how about the bulk density of cement paste. Are they higher and lower than the raw materials? Are they stable values as curing ages extend and thus more hydration products formed?

Recently, several cement and blended paste samples of mine have been tested using MIP. I list the bulk density results as below. All the pastes are mixed at water : powder = 0.4, sealed and cured at 20 °C. As each scheduled curing age (1, 3, 7, 14, 28 and 91 days) reaches, the hydration were stopped by liquid nitrogen, and later freeze dried to remove the frozen free water. 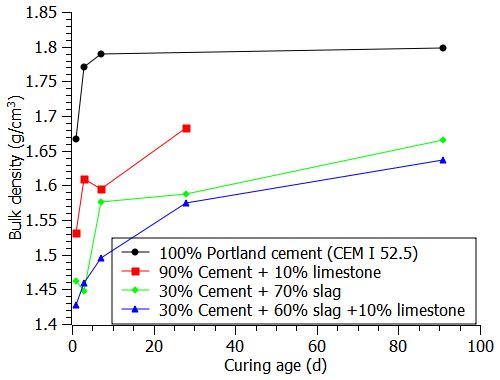 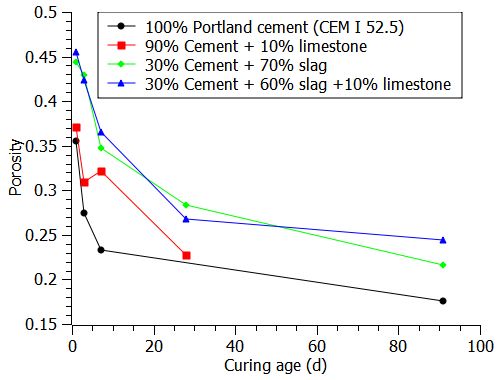